The history of our house 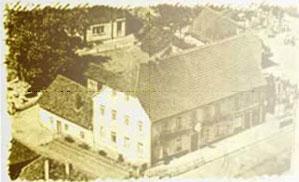 The history of the hotel dates back to 1846 and even today, over many decades, the Hotel Reichsadler in Buchen (Odenwald) is still convincing in terms of quality and quantity.

Christian Reinhardt has been running the Hotel Restaurant Reichsadler in Buchen since 2016. Since 2017 the Hotel Reichsadler presents itself with a new corporate design and new website

Finally, in 2000, the restaurant area of the Reichsadler was rearranged into a contemporary design. Together with the idyllic summer terrace there are many possibilities to have pleasant, relaxing and comfortable hours in the Reichsadler.

Peter Reinhardt and his team is always anxious to offer its guests from near and far comfort, enjoyment and a relaxing stay.

Since 1966 under Peter Reinhardt

Since 1966, after his gastronomic qualification, Peter Reinhardt - together with his mother for the first five years - has managed the destinies of the Reichsadler. This was the time of the first major renovation and modernization of the building.

The second modification was in 1978. The guest room has been changed into a rustic communication area with a restaurant and a side room. The increasing need for overnight stays prompted Peter Reinhardt to expand and modernize the guest rooms at the beginning of the 1980s.

With the modernization to comfortable hotel rooms in 1984, Peter Reinhardt took the first step to establish the Reichsadler as a hotel restaurant. The next expansion phase was initiated in 1990 with the acquisition of the neighbouring building. After extensive modernizations, this guesthouse offers eleven elegant guest rooms since 1995.

In 1906, Josef Reinhardt bought the building and thus combined the family history with the tradition of the Reichsadler.

The family has been running the guesthouse "Zum Reichsadler" - initially in part-time. Josef Reinhardt holds a guild master and focussed to ran his locksmith shop, a car and bicycle repair shop and temporarily an Esso filling station in the outbuilding.

After the Second World War, the Reichsadler accommodated a donut bakery under the lead of the Americans.

1846 Establishment of the brewery

The Reichsadler was influenced by beer from the very beginning when brewer August Blatz built the building in 1846. At that time, however, the building was not yet used for gastronomy culture, but for the storage and production of beer. Simply a brewery.

Only with the upcoming owner, Adam Friedrich Herd, in 1872 the house received its name "Reichsadler" which is still valid today and with the authorisation to operate a 'Schankwirtschaft'.

With us you pay with

Pay comfortably with us locally by Girocard, Mastercard, Maestro, American Express or Visa.